Joining us at Affordable Art Fair Milan is one of our favourite street artists – Ale Puro! Alessia of Alessia Formaggio Gallery interviews him in our latest blog.

Here at Affordable Art Fair Milan, we have a thing about street art. Ale Puro can take part of the credit for this, being one of our favourite artists! Born in Vigevano, having travelled around the world to find learn more about the culture of murals, he returned to Italy and conquered the art world thanks to the charming characters who animate his works, metaphors of hope and dreams. 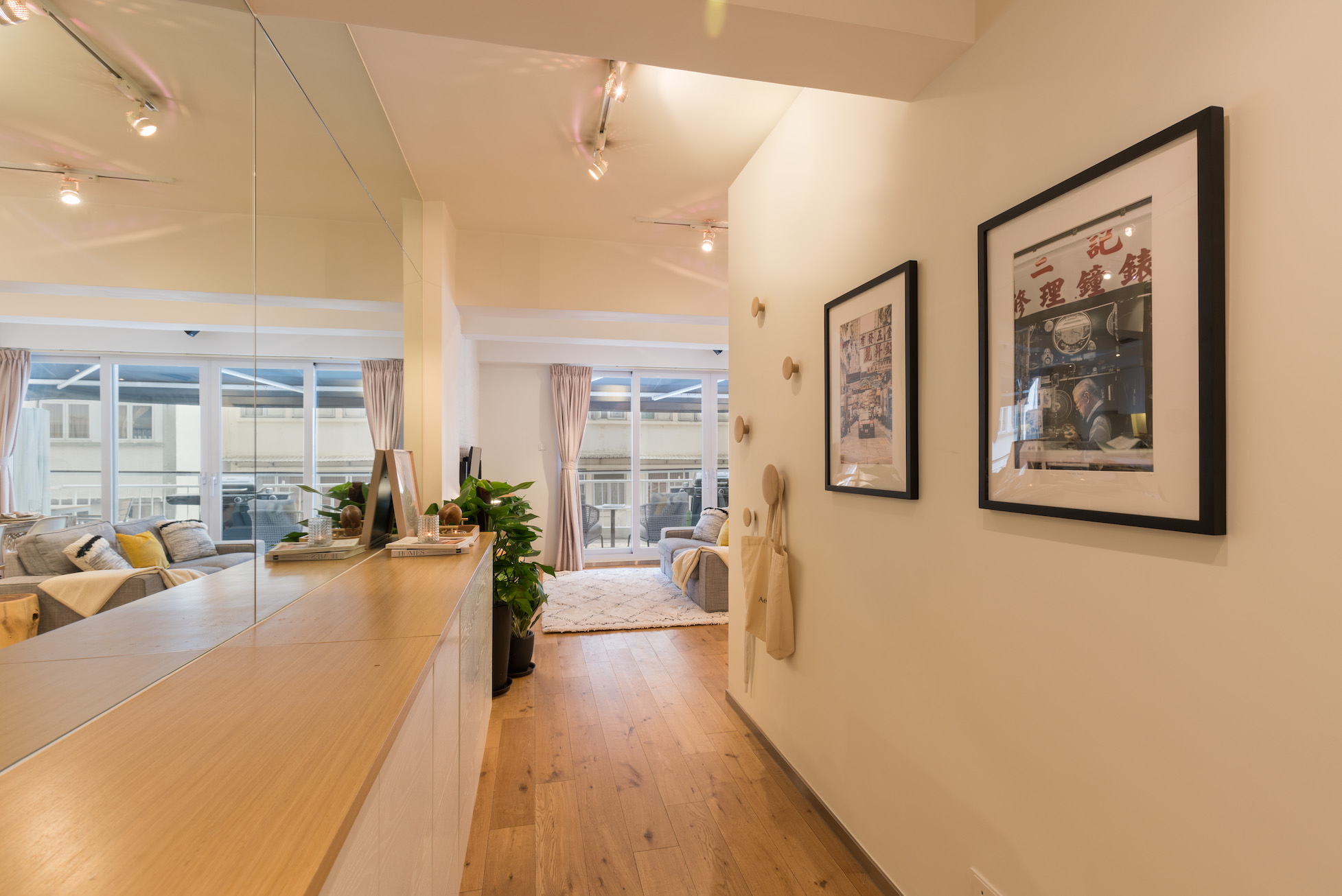 Using colour-blocked shapes and backgrounds, with his characters gazing out at the viewer, Ale’s unmistakable work blurs the lines between pop and surreal. His playful, yet delicate, paintings allow him to connect with the observer, inspiring empathy through their direct simplicity.

Since 2018, his mural “In quel fiore ci nascondevo il mondo”, has been part of the MAUA Museum of Urban Art in Milan, an open-air, moving museum dedicated to street art. We’re lucky that with thanks to Alessia, Director of Alessia Formaggio Gallery, Ale will join us at this year’s Affordable Art Fair Milan! And as Alessia has been working with Ale for many years, no one could be more suitable than her to lead an interview with Ale to help us learn more about this work.

If you don’t know his work yet – read on as you’re in for a treat:

Alessia Formaggio: Can you tell us a little bit about your work, how did you start?

Ale Puro: I think I’ve always wanted to express myself through my artwork… but when I turned sixteen I found the right way to fully express myself when I discovered the world of writing, more commonly called graffiti art.

AF: Where does your interest in painting come from, in particular for street art?

AP: My interest stems from the passion that I had for hip hop culture as a kid, it’s what connected me to writing… seeing art on the street that perhaps hadn’t been there the day before, people who wrote by signing with their tags, the colours… I didn’t know anything about the world, but I was really intrigued by it. 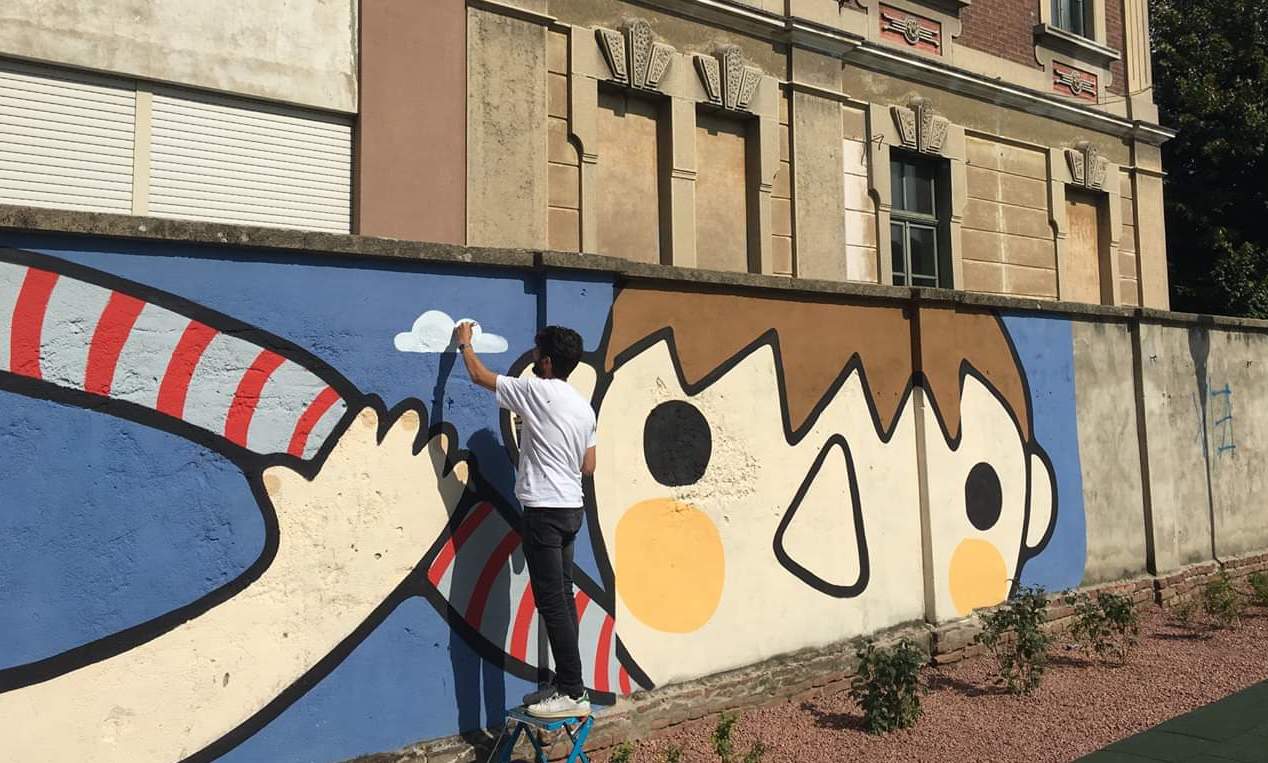 AF: What inspires your work?

AP: Anything, I really like walking and observing: even the most trivial and mundane things, that are always around, can be an important element for inspiration.

AF: What was the inspiration behind the work “In quel fiore ci nascondevo il mondo” [The world was hiding in that flower]?

AP: The mural in Via Sammartini in Milan (image below) was created for the 70th anniversary of Italy’s liberation: I think it was the first mural I created, where I had to do quite a bit of research first, on this extremely important historical and social issue/period. I watched several documentaries, then I heard an interview with Liliana Benvenuti, a partisan called ‘Angela’, who uttered a phrase [the title of the artwork] that unleashed the magic in me. 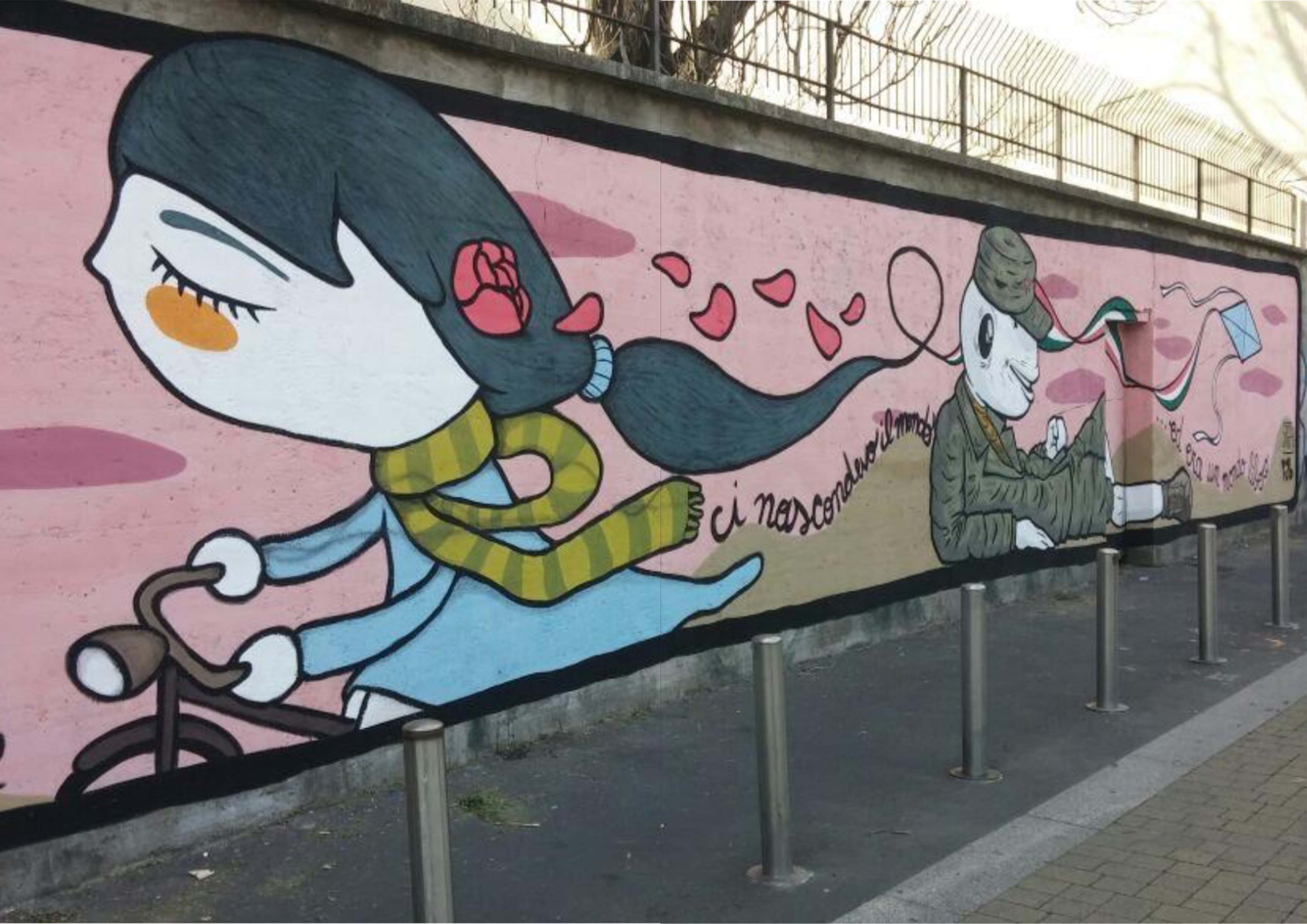 AF: Which artist has had the greatest impact on you and why?

AP: I have always been passionate about Quentin Blake’s illustrations, perhaps because the first book I ever read (Roald Dahl’s The Witches) was illustrated by him, which is likely why I’m particularly fond of him. But if I had to say which artist has had the biggest impact on me then it would be Jean Michel Basquiat. When I was going to accounting school the only thing that was important in my life was graffiti, and it was actually my business economics professor (Prof Emy) who introduced me to this connection between the world of writing or graffiti or street art, with the world of art, and the first artist she spoke about was Basquiat.

AF: How would you describe a typical day in the studio?

AP: Working with different techniques and surfaces (from canvas to sculpture, from graphics to walls) gives me the opportunity to vary my days a lot, so I never really have a typical day. I might suddenly change plans, but that’s another story. 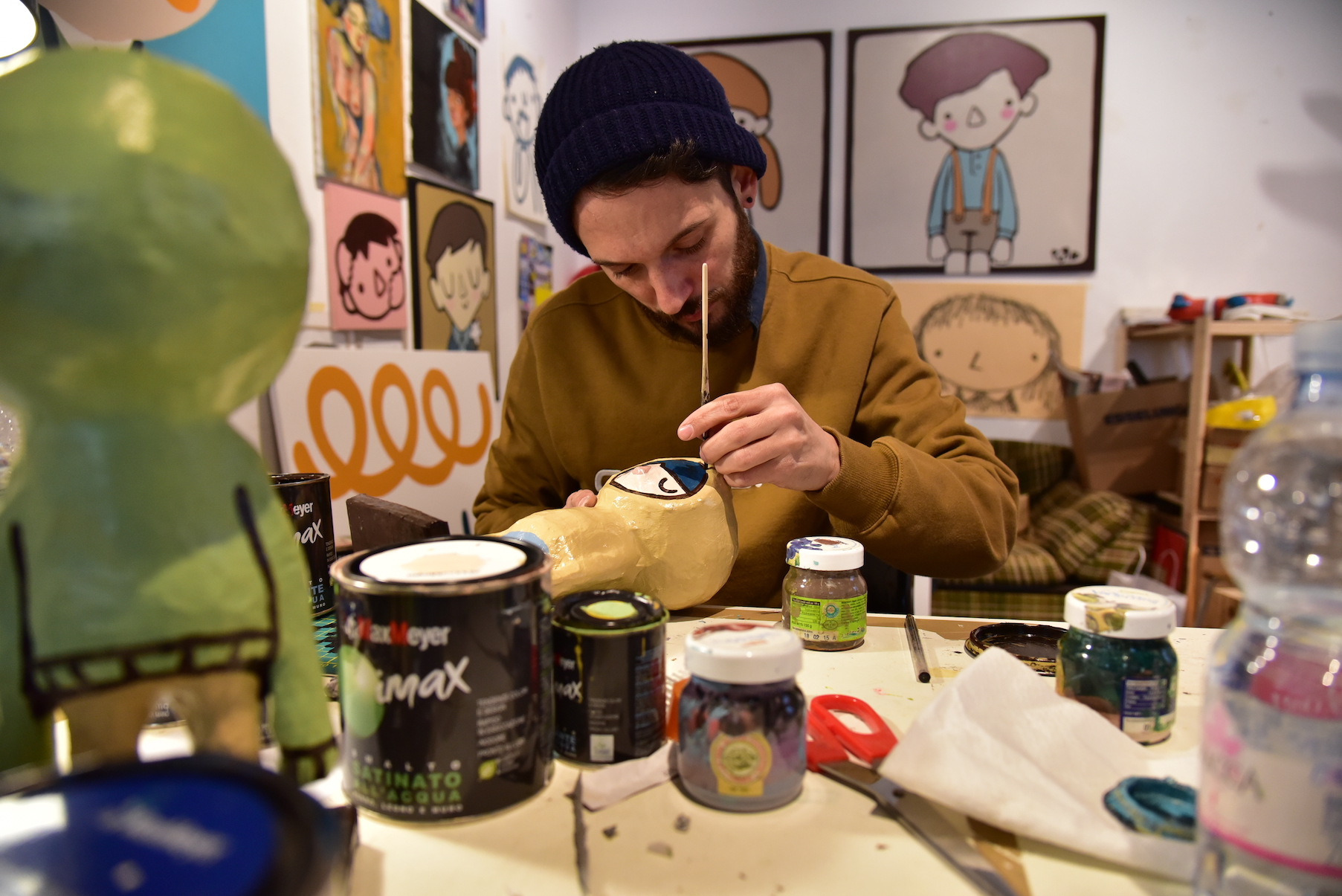 AF: Can you tell us about the creative process behind one of your works?

AP: Like I said, working with different medias or techniques means the processes are also different: the only thing they have in common is the idea, I start with an idea jotted down on paper and then decide how to develop it, whether to turn it into a painting, a wall or a papier-mâché sculpture.

AF: What would you say are the most rewarding and stimulating aspects of being an artist today?

AP: When you’re lucky enough to have a job that you like, which can be anything, not just an artist, then the job is already rewarding in itself, and the stimuli naturally follow as an artist. 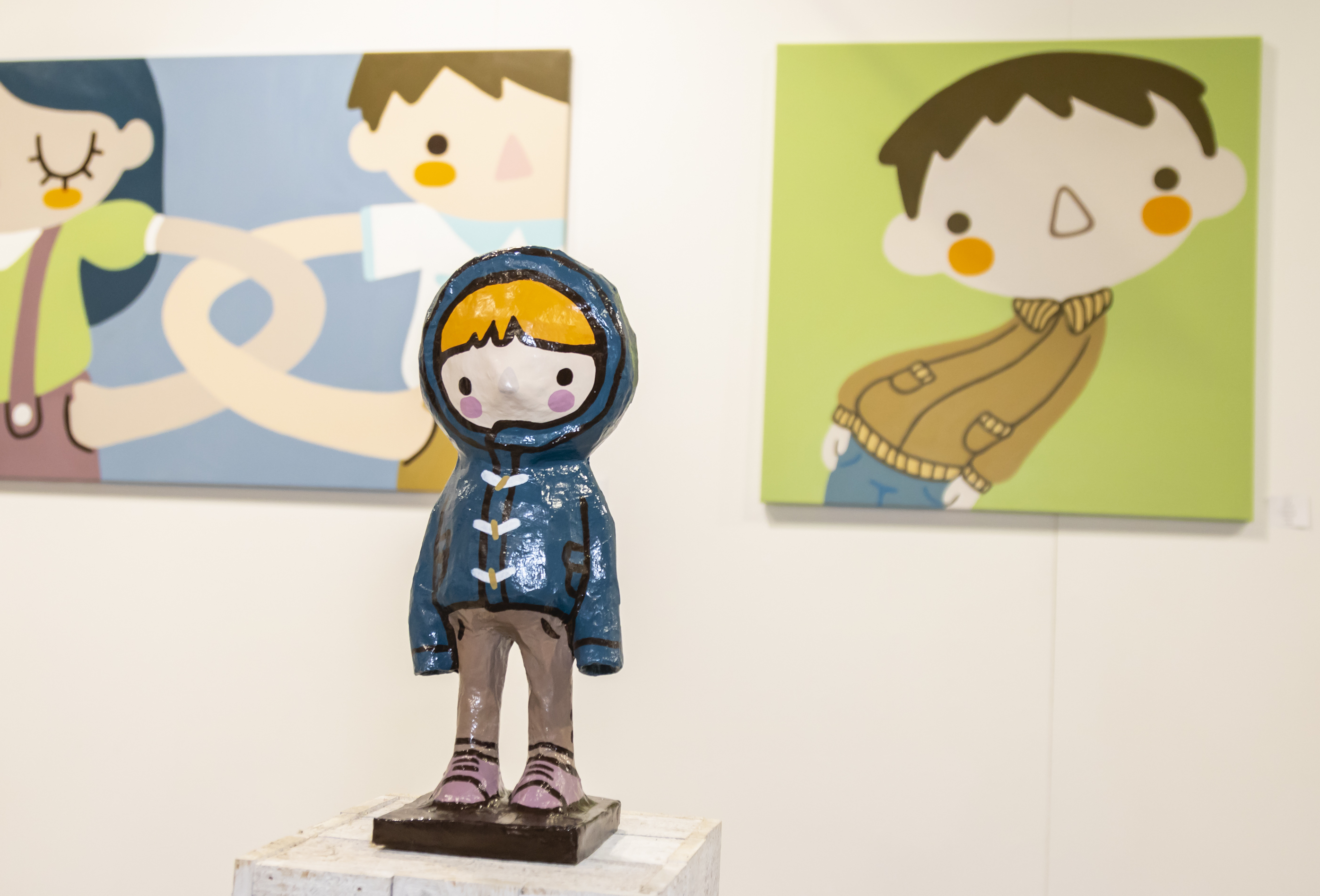 AF: What is the most memorable moment of your career so far?

AP: When I made my biggest mural in my city. That was when a lot of people began to welcome and appreciate my work and I think that after my work, Vigevano has greatly opened up to the world of street art and graffiti with much more positivity.

AF: What advice would you give to aspiring artists reading this interview?

AP: Work hard, perhaps even making sacrifices, without expecting anything: the results will come when you least expect them. Never lose your passion and never compromise. A fundamental aspect of my growth has been transforming the many hardships and discouraging moments into outlets for creativity.

Don’t forget that Alessia and Ale will be waiting for you at this year’s Affordable Art Fair Milan (6 – 9 February, Superstudio Più). Don’t miss out on the opportunity to see Ale’s works in person, plus meet the artist and the mentor!