An introduction to sculpture

From marble busts to abstract assemblage, sculpture today is more popular than ever! Bring some three-dimensional creativity into your home.

Sculpture, by definition is any kind of three-dimensional art; a practice in which artists embrace the physicality of raw materials to create free-standing or leaning works through additive or subtractive processes. In this blog we’ll give you a whistle-stop tour of the history of sculpture, followed by a quick introduction into the four primary processes of sculpting; carving, casting, modelling and assemblage

A BRIEF HISTORY OF SCULPTURE

Sculpture has a long history – it’s been the medium of choice for rulers and the world’s most powerful since Classical antiquity. But since then it’s had many guises: from marble busts in the eighteenth and nineteenth centuries, to the sleek, gold pieces of Modernists such as Brancusi. Whilst originally limited to stone, ceramics or wood, since the 60s pretty much any three-dimensional piece is viewed as sculpture, in terms of its process and materials.

And today, it seems to be more popular than ever! Perhaps it’s the tangible quality of the three-dimensional, within a world when so much of the visual is in a two-dimensional form, walking around a sculptural, textural form in a gallery environment may have even greater appeal. Whatever the reason, we’re big fans of the many forms that sculpture can take; from figurative and abstract, to somewhere in between.

A QUICK QUIDE TO SCULPTURAL TECHNIQUES 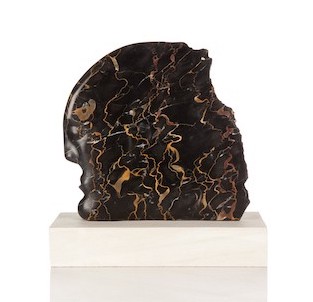 Carving is a reductive or subtractive technique in which the artist removes portions of the chosen material, through cutting or abrading, to create a piece. The main materials used in carved sculpture are stones such as marble, bone or wood. Wood is very pliable and is therefore easy to carve, though subject to humidity and extreme temperatures, and must be dried and cured prior to carving to prevent splitting or warping. Marble, the stone used most since antiquity, is very hard and difficult to carve; alabaster, which has a similar aesthetic property to marble, is soft and easy to carve; limestone, granite and sandstone are also popular media.

An example of a carved sculpture is this striking marble piece called Viking by Rose Eva. The raw edge and flowing natural seams of the marble contrasting beautifully with the ponderous carved profile. 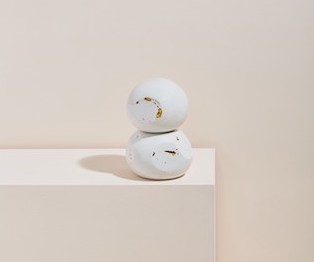 A fluid substance such as rubber or molten metal is poured into a cast (a mould which is made from a clay or wax model). Bronze (an alloy of copper and tin) is often used in casting, but materials such as concrete and resin can also be cast. Moulds can be used to make multiple casts, forming an editioned collection of sculptures.

Modelling is an additive process in which a three-dimensional form is shaped fromasoft material such as clay or wax. Works can be reformed using the materials pliable nature until the artist is satisfied. Clay works are then fired in a kiln to make the clay permanent and durable. 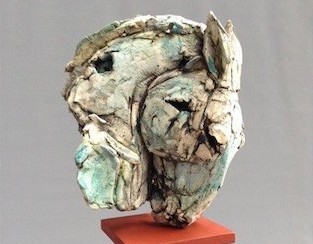 Take Horse Head I, as an example, in which you can clearly see how Brendan Hesmondhalgh has hand worked the clay, creating textured strata which combine to form the horses head.

The term refers to three-dimensional works in which pre-formed elements (e.g. rope, scrap metal, newspaper) are adhered together in processes like welding, tying, weaving and sewing to create a sculpture. The process was most evident in the revolutionary art movements during the first quarter of the twentieth century in France, Russia, and Germany.

It’s should be no surprise that artist George Koningstok began his career as an engineer. His inventive assemblage pieces, such as Safe Europe, or it is lost – in spite of the cost! playfully reuse electronic and mechanical elements to create colourful constructions – just bursting with joy!

Why not browse through our full range of sensational sculptures and bring some three-dimensional creativity into your home.