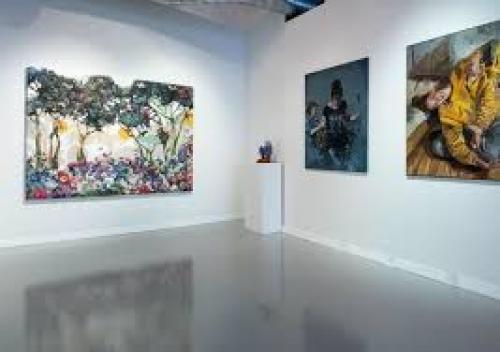 Galleri Ramfjord was founded in 1998 by Elisabeth Ramfjord. Centrally located in Oslo, the premises hold three exhibition spaces covering more than 4,000 sq.ft. in total. Historically, the gallery’s prime mission has been to champion newcomers and emerging artists. However, as the artists who joined the stable 20 years ago have made names for themselves, the gallery now also represents a number of well-established artists. A dynamic exhibition venue in downtown Oslo, Galleri Ramfjord is known for its frequent cross-disciplinary events and artistic stunts. While the main focus is on oil painting, there is also a wide range of drawing, photography, mixed media, video, sculpture and installation on display. Over the last few years, Galleri Ramfjord has had increasing success on the international art scene, collaborating with partner venues in New York, Chicago, Amsterdam and Copenhagen. Since 2013, it has participated on the international art fair circuit, with great success and sold-out shows at Art Copenhagen (2013-2015), SCOPE Miami (Art Basel Miami week 2013-2019), SCOPE New York (Armory Week 2015), AAF Stockholm (2017-2019) and Scope Basel (Art Basel 2016-2018). In January 2015, Elisabeth Ramfjord curated an exhibition at MANA Contemporary Museum in New Jersey, just outside New York, while securing five artist-in-residence spaces for her represented artists during each summer since 2015. Later in 2015, she was selected to be on the Board of Directors at The Eileen S. Kaminsky Family Foundation (ESKFF) – a New Jersey-based channel for connecting artists, curators, collectors, galleries, cultural institutions, and the public through exhibitions and programming based on private contemporary art collections.