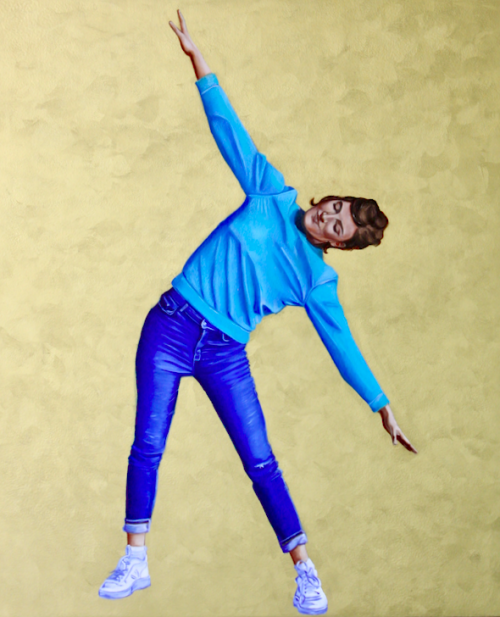 Originally from Hertfordshire, Victoria Heald moved to London to study her Foundation Year at Camberwell College of Art, receiving a Distinction. She continued on to Chelsea College of Art and Design to study BA Fine Art, graduating in 2011 with First Class Honours. Victoria’s work aims to communicate an intensity of the painted figure through pose, gesture, expression and look. The changing surfaces, materials and compositions heighten the figurative image in each piece. Her recent filmic series referenced different cachets and seductively rich imagery of cinema from 1940s – 60s. Using people she knows as models, Victoria creates an image which juxtaposes the individuality of the sitter, with more recognisable images from visual culture. This creates a shifting dynamic between individual details and the cachet of an iconic or recognisable image. These never-settled boundaries are added to by the similar shift between surface and material. The figures are painted thinly in oils, but the backgrounds use light-reflective acrylic paints, taking the subject out of their original context and slipping them into a non-existent space of painting. The paintings are made from referencing photographs taken in a photographic studio with strong theatrical lighting. Movement is key to many of the pieces, the photographs retain a momentary immediacy, similar to the moving film image – as Deleuze called it, the movement-image. Rather than static posed shots, they are stilled moving images. The original photographs are subverted in painting through a careful selection of details. The details of the specifically chosen sitter are directed into recognisably theatrical or dramatic poses and gestures, enhancing the disjunctions within the piece between the cultural cachet and individuality of the sitter. Victoria’s next series of work will focus on theatrical poses and gestures from a range of music, performance and dance.