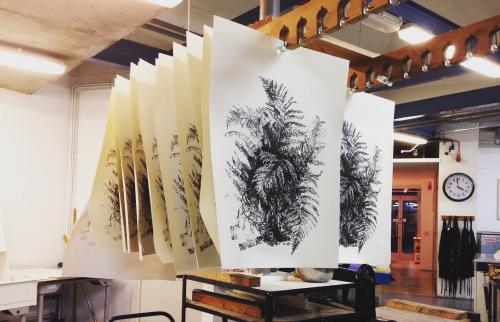 Venetia Norris enjoys the spontaneity of drawing from life and communicating a sense of place. Venetia only feels that she fully understands something if she has drawn it. Venetia Norris loves the sound of a pencil leaving a mark, varying its pressure, looking carefully at what I am drawing while the work evolves upon the paper. She uses a variety of materials including graphite, pen & ink, paint, charcoal gold/silver leaf upon paper and board. In Venetia’s work, she tries to understand and express the journey of how a plant or flower grows. She believes that everything living has an individual shape and form, everything makes its presence felt in some way, leaves a mark, some trace. Using just the tip of the pencil, graphite, and ink, Venetia tries to reveal the intricate layers, the sensuous interiors, the infinite variety and texture of a leaf, a stem, or a petal. She sees beyond the initial form of beauty, gently but determinedly going behind the disguise of blossom or colour. Venetia Norris’ enthusiasm and curiosity of the plant world continues to be a lifelong passion for her and her artwork Venetia Norris studied at Chelsea School of Art, London College of Fashion and Sir John Cass Art School and has been a professional artist for the last seven years exhibiting widely. Her artwork has been shown at the Affordable Art Fair, Christies, London, and included in several group exhibitions at the Mall Galleries London. To date she has had five solo shows, the most recent was held at the end of a residency at North London Collegiate School. Venetia completed a Fellowship with Ballinglen Arts Foundation, County Mayo, Ireland in March 2016. She is also delighted to have been awarded a place on the EU funded professional development program for artists called London Creative Network. Venetia Norris is currently collaborating with the Royal College of Physicians and will be exhibiting with them in 2018. Venetia Norris is also an associate Member of the Society of Graphic Fine Art, Axis Art, and London Print Studio & Putney Artists.