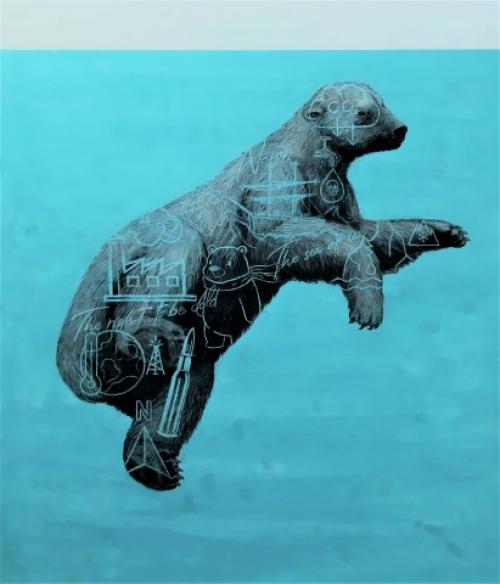 Tom Van Herrewege obtained his BFA from Loughborough University in 2005 and his MFA from Wimbledon School of Art in 2006. Tom has undertaken various residencies, including; Tanks Art Centre, artist in residence, Cairns, Australia, 2011; Kwazulu Natal Society of Arts, artist in residence, Durban, South Africa, 2013 and Brooke House College, artist in residence, Market Harborough, UK, 2015. His solo shows include; 'Paradise Lost', Kwazulu Natal Society of Arts, Durban, South Africa, 2013; 'Pica pica' (a pop-up exhibition in Market Harborough in conjunction with residency at Brooke House College and the release of the publication ‘Pica pica’), 2015; 'Superstitious Beasts, Loughborough University Gallery, Loughborough, UK, 2016 and 'Hit List', StudionAme, Leicester, 2018, Surface Gallery, Nottingham, 2018, Creswell Crags museum, Nottinghamshire, 2019 and LCB Depot, Leicester, UK, 2019. He has also self-published the following publications; 'Creature fady: Perceptions and understandings of the animal kingdom in Malagasy fady and folklore',2014; 'Pica pica', 2015 and 'Hit List: A visual guide to the extinction of animals', 2015. . Perceptions and understandings of the animal kingdom in Malagasy fady and folklore. Self published in the UK. Artist statement; 'My work is inspired by the incredible diversity of animals that exists across the world. I am interested in man’s interpretation of this throughout history and the ways in which the animal kingdom is perceived through different aspects of culture. It is the variety in human perception that is formed from experiencing animals, through their charismatic behaviour to their physicality, and how this is embellished within culture that drives my practice. Over the last few years my practice has developed more and more into being more conservation focused. The work I make always has a strong message within it of the need to conserve the natural world and to protect the animal kingdom from extinction.'