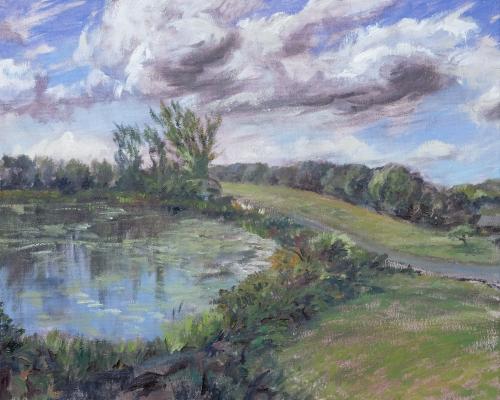 STEVE ZOLIN was born in 1972 and raised in West Orange, NJ. He earned his BFA cum laud at Washington University in 1994 and won an MFA Fellowship at Florida State University, graduating in 2005. Zolin has exhibited widely in New York, New Jersey, Santa Fe, Toronto, and Florida. In 2018 he installed three permanent sculptures in the lobby of the new AC New York Times Square Hotel by Marriott on West 40th Street in Manhattan. In 2017 he executed eight 11’ paintings for the Windlass Restaurant inspired by the Grand Hotel Era of Lake Hopatcong, NJ. In 2015 he completed a commission by the New York City Parks Department for a 28’ mural in Manhattan’s First Park, and could be seen at Scope New York at the Untitled Projects booth. Zolin was a featured solo artist at the 2012 (E)merge Art Fair in Washington, DC. and his work was seen in the 24th International Juried Show at the Visual Arts Center of NJ, curated by Susan Kismaric of New York’s Museum of Modern Art. His installation “Unstraightness,” explored space, gesture, and movement, and was sponsored by Chashama and The National Endowment for the Arts. Other highlights include a mural for Senator Joseph Lieberman’s home synagogue in Connecticut and a solo exhibition at the Clifton Arts Center. Steve lives in Manhattan with his wife, photographer Robin Noble-Zolin, and works from his studio in Brooklyn.