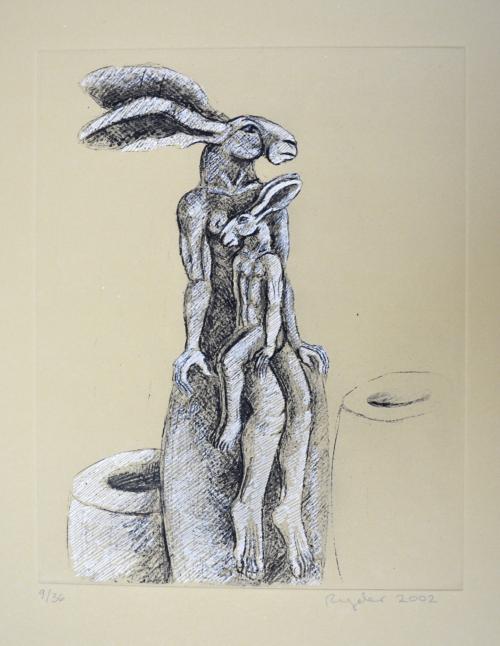 Sophie Ryder was born in London, England, in 1963. She studied combined arts at the Royal Academy of arts 1981-84, where, while obtaining her diploma in painting, she was encouraged by Sir Hugh Casson, the then director of the Royal Academy, to develop her sculpture. ​Inspired by Picasso, Goya, and Henry Moore, she famously developed the Lady Hare as a counterpart to Ancient Greek mythology's Minotaur. Sophie’s world is one of mystical creatures, animals and hybrid beings made from sawdust, wet plaster, old machine parts, and toys, weld joins and angle grinders, wire 'pancakes', torn scraps of paper and charcoal sticks. Working 'big' is a very significant feature of her work, and she enjoys rising to the constructional and creative challenges which flow from this aspiration. It's because of this she has to have a very disciplined approach to her work. Since 2000, Sophie Ryder has exhibited widely in public exhibitions in the UK, Canada, the United States, Eire, Belgium, and the Netherlands. In Europe, the spectacular 100-foot wire Torsos was exhibited at the Hague in Holland, sited in an underground chamber. A major show of indoor and outdoor work went to the Beranneman Foundation in Belgium. Shows in North America included substantial exhibitions in Montreal and Vancouver and recently Sophie participated in the Arts Festival in Carlow, Ireland.