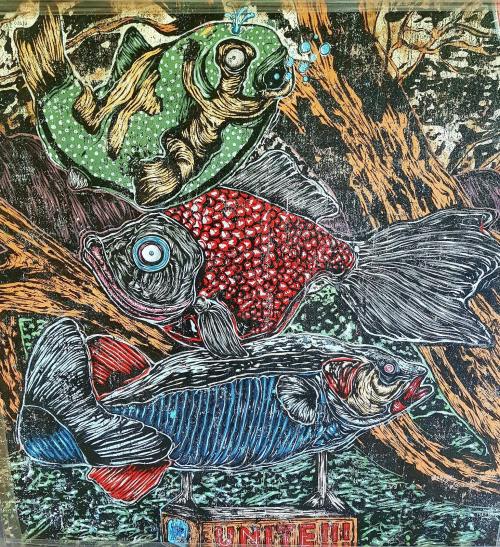 Shafiq Nordin was born in 1989, in Negeri Sembilan, Malaysia. He was just 10 when he started drawing comics and cartoon characters on pages ripped out from of his school exercise books. His parents – in recognising his interest and to prevent him from tearing more schoolbooks – got him his very own art supplies. He even sold his drawings to his classmates for 30 sen a piece. Shafiq majored in painting and got his degree in Fine Art, from UiTM Shah Alam, in 2012. Shafiq, fuelled by passion, grew from strength to strength as he readily took on several group exhibitions at the start of his career. The Aletheia exhibition, his second solo, is a testament to his thirst and drive. His 11 artworks, including a mini horse sculpture, stayed true to the title of the show Aletheia, an ancient Greek philosophical idea which means “truth or disclosure”. Shafiq’s first solo exhibition Imperium, at Hom Art Trans gallery in 2016, now looks like a precursor to Aletheia. The show prominently featured fantastical beasts in odd landscapes, the surreal pop paintings also served as metaphors for his observations in the art scene’s politics. There's a certain playfulness, cheekiness, and childlike curiosity, albeit with a sardonic twist, in his works. Shafiq won the Malaysia Emerging Artist Award (MEAA) in 2013. “Since the award, pop surrealism has been my style,” says Shafiq. The artist, who admits he binge-watches movies (sci-fi to history) daily to find inspiration for his artworks, is as innovative and resourceful as he is creative. Six years ago, he established the Ara Damansara Artists collective, comprising 12 studio artists. The community-based artist group regularly organises art programmes and workshops. Shafiq also founded Studio Pisang at the same time with fellow artists Hisyamuddin Abdullah and Sabihis Pandi.