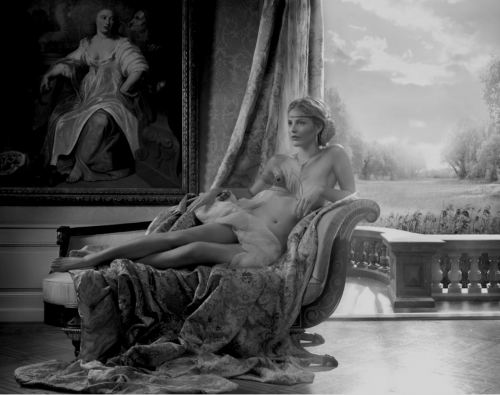 Studied at the Royal Academy of Art in The Hague graphic and typographic design with a major in photography. He also studied photography at St. Joost Academy of Art in Breda, The Netherlands. Inspiration Ronald Schmets' inspiration was born in South Limburg in the Netherlands. The Catholic boys' school he went to in the southern most tip of the Netherlands was housed in an old marlstone building that originally served a monastery. The religious prints and statues made a powerful impression on the young Schmets. He was struck by the contrast in the images of Jesus and Mary. While the Son of God was depicted virtually naked and in a way that was almost erotic, his mother was always heavily robed and exceptionally serene. "I'm going to reverse those roles when I grow up", he thought. In line with the tradition of the great artists of the Renaissance, saintly women swathed in fluttering robes, play a leading role in his work. Always surrounded by religious references and symbols. Visions of the feminine as virgin, lover and mother, a power that men will never possess. His work constantly returns to the theme of the saintly women of days gone by. Pictures of women depicted with respect. Women who radiate serenity and composure. Schmets' latest series, "FEMINA SANCTA", pays tribute to saintly women such as Mary Magdalene, Joan of Arc, Saint Theresa and Saint Bernadette of Lourdes, all of whom are depicted in Renaissance style. Schmets draws his inspiration from celebrated artists such as Botticelli, Rubens, Bouguereau, Waterhouse and Klimt. Schmets started painting and drawing at the age of four and sold his first painting at the age of twelve. When he was fourteen he was given an old Zenith camera as a birthday present and quickly developed a love of photography. He was the youngest student ever to start studying at the KABK Royal Academy of Art in The Hague. As a graphic designer he was able to combine his love of photography with designing and painting. He then completed a short postgraduate course in photography at the St. Joost Academy in Breda. In his first reportages, Schmets focused on "the real person and their environment". A quick pencil sketch eventually results in an image that is sometimes made up of 35 different photographs. He sometimes even combines photographs of three different models in order to be able to evoke the feminine archetype he has in mind as fully as possible. He starts by photographing the background. Then he lights the models and props accordingly. He prints the image on metallic paper, a technique that combines digital print with a developing tray. Eventually, the print is stuck on dibond and embedded in three layers of synthetic resin. This then becomes the lens through which the print is perceived. This approach enables Schmets to give each image its own unique look.