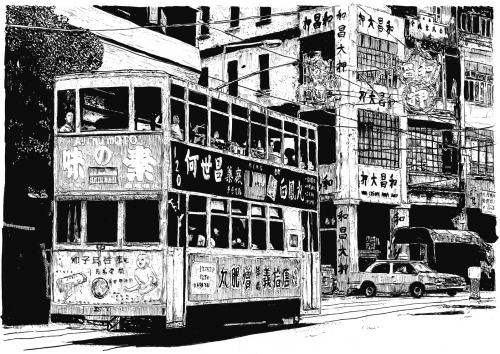 Pen So is an illustrator and graphic designer born in Hong Kong. Autodidact, he started to draw ever since he graduated from HKDI. The creation of each and every one of his artworks has always been, and always is a way to release his instinctive emotions which stirred up inside, yet best let out through his gifted artistry creation. Ma Wing Shing, Makoto Shinkai, and Miyazaki Hayao are the important artists/mentors that inspired him all along his art journey. In the past couple of years, Pen focuses in the works of creating comics and novel illustration, he published illustration book "Trap", and joined "Wall" art exhibition in Brussels and Berlin. Pen collaborates with Mercedes-Benz at the “Stars of Hong Kong ” show in 2019; and with Audi Hong Kong he participated at the “R4MBLER : The Memory of Tomorrow” exhibition, and in the promotion of the Audi A5 car. Pen joined promotion with Mortal Engines movie. In 2017, Pen So is one of the Hong Kong artists in participating in “The Pitch of Tension – Hong Kong Comics Power”, and joined the 44th Angoulême International Comics Festival in France organized by Hong Kong Arts Centre and Comix Home Base. In July the same year, he published "The Graphic Novel City Of Darkness: A Romantic Escape" with Yu Yi. Pen published his first individual illustration book "Hong Kong Havoc" in 2016, and won all major Publishing awards in Hong Kong during the year. In 2014, Pen was a member of the elite team in the 3rd Hong Kong Comics Camp; and he organised the exhibition “Memories of My Home (Part 1 & Part 2)”, presenting his artworks together with a series of postcards to stimulate and enlighten readers to recollect the memories of Hong Kong. In 2013, he participated in the Comics Masterclass presented by Comix Home Base. Pen So’s illustrations had been collected by local and overseas corporations and private collectors.

Artwork by Pen So