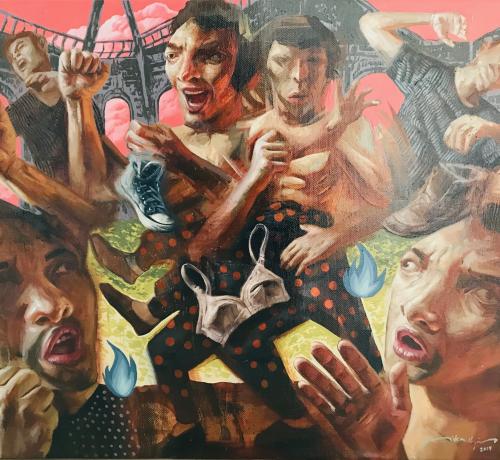 Nik Mohd Shazmie was born in 1991, in Kelantan, Malaysia. He has a Diploma in Fine Art from the Faculty of Art & Design of Universiti Teknologi MARA, Kelantan. He also received a Bachelor (Hons) in Fine Art, in 2014, from the same university. Shazmie’s current work seeks to create a “new movement”, combining the intricacies of realistic detailing and techniques, and the Cubism art style of Picasso. The young artist sees himself as a plastic surgeon operating on paintings, instead of people, deconstructing portraits and reassembling them in ways that are less than expected. Shazmie lays bare the obsession of “perfection” that seems to be the pursuit endgame for many today, by individuals wanting parts of themselves looking like the manufactured beauty they see in the media, embodied by personalities they admire. Shazmie is one-third of the commercially known ‘Nik Brothers’ or ‘Nik Trio’, a collective of fine artists. In 2015, the three brothers had their debut exhibition with G13 Gallery. ‘Art Trio’: The Nik Brothers, featured new figurative paintings by brothers Nik Mohd Hazri, Nik Mohd Shazmie and Nik Mohd Shahfiz. The trio are steadily making their mark in the local art scene with their skilfully rendered figurative works on themes ranging from the serious, humorous to the bizarre.  One of Shazmie’s breakthrough performances in the industry was when he was named the grand prize winner of ‘Nando’s Peri-fy Your Art’ annual competition back in 2014 which later on granted a winner showcase exhibition for the artist. The artist also won the prestigious UOB Painting of the Year Established Category Gold Award a year later. Nik M Shazmie now resides in Rawang.