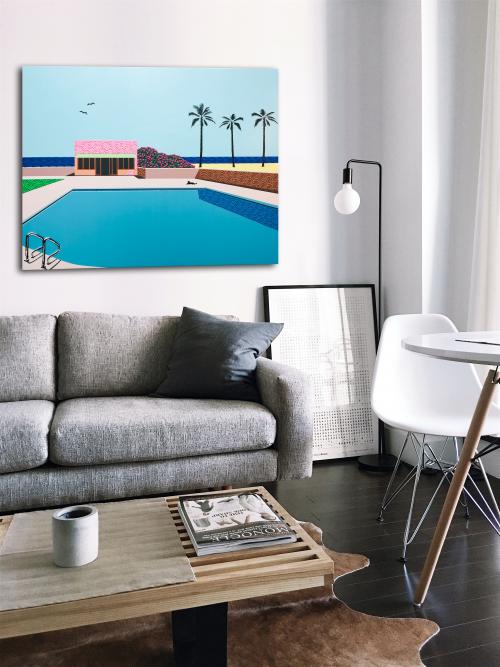 Natan Elkanovich was born in Moldova, USSR in1966, moving to Israel in 1976 and where he still lives and works. He attended Shenkar, College of Engineering and Design, Tel Aviv, obtaining a Bachelor of Design degree in Fashion Design. Since 1995, Natan has been working as a senior costume designer in the Israeli cinema and television industry. To date, Natan Elkanovich he has been awarded four Israeli Academy Awards for best costume design. One of the highlights of Natan’s career was to design the costumes for internationally acclaimed actress Gal Gadot’s last Israeli movie prior to being selected to play Wonder Woman. When their work together was done, he presented the actress with her portrait. Ever since painting became an integral part of his life, Natan has worked to develop his unique painting technique, in which he mixes all kinds of plastic materials in different quantities, which include amongst other things silicon and acrylics, which he then applies on the canvas. This medium creates a 3D texture on the surface. Sometimes he adds Swarovski elements and all kinds of glitter to the end result. The materials are painstakingly and entirely made by Natan, and there is no machinery involved in the process. In addition to the paintbrush, Natan also uses kitchenware to apply these self made materials. As he recalls, this stems from his deep seated roots in the kitchen, embedded in him from early childhood. “Most of my time after school was shared with my Mom in our kitchen. She was an excellent cook and I used to sit with her there and talk to her, do my homework, draw in my sketchbook and help her with all the cooking. I would decorate the food before it was served, creating small works-of-art from food by using a variety ofhenware.”