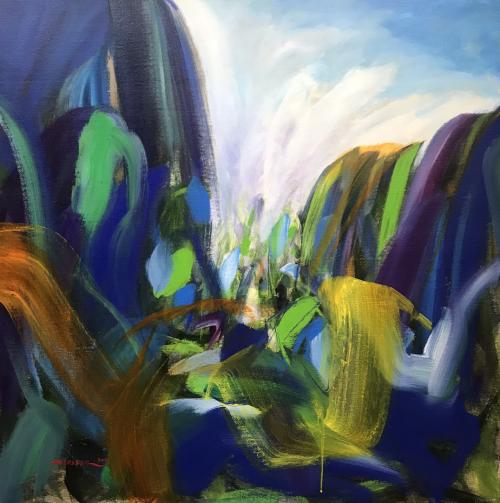 Mohd Shaparel Bin Haji Salleh was born in 1972, Malaysia. He graduated with an Honours Degree in Fine Arts from University Science Malaysia (USM) in 1995. Although he started with Realism, Shaparel is now known as an Abstract Expressionist. His switch, which was starling to many including his ardent admirers, displays not only Shaparel’s growth as an artist but his versatility as well. Shaparel held his first solo exhibition, Pusaka Rimba, Tuanku Fausiah, Museum and Gallery, USM in 2007 and has gone onto hold three more solo exhibitions including, Natural Environment (2011), Beauty for Survival (2012), and Imbas Umbi (2014). Known for his pleasing appeal and rawness in emotions, Shaparel has enjoyed much success with collectors as well. His paintings can be viewed in Bank Negara Malaysia, Balai Seni Lukis Sabah, Muzium dan Galeri Tuanku Fauziah, and Soka Gakkai Malaysia to name a few. Mohd Shaparel has been awarded three times, the first one is a 1997, CONSOLATION PRIZE, NEW TALENT, PESTA PULAU PINANG, the second is a 1999, MAIN PRIZE. YOUNG TALENT, PESTA PULAU PINANG, and the third, 2ND PRIZE, TASIK KENYIR PAINTING COMPETITION, 2007, TASIK KENYIR.