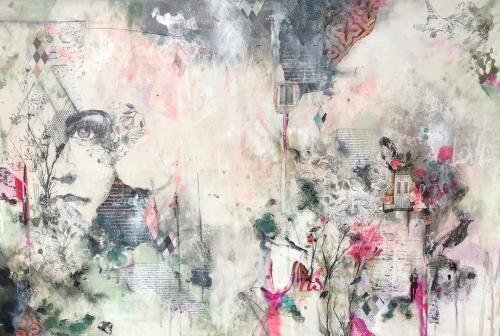 Marie-Josée's artistic work comes from the intimacy and the subjective relationship tied to the notion of identity and abandonment particularly present in adopted child. She is precisely interested in producing images that reveal the sentiments behind the mother and child bond. Marie-Josée is also interested in the overall concepts of transformation and metamorphosis. More precisely, she finds herself fascinated by the unfolding of the path of life, of elements from a body's embryonic state through birth and their abilities to change. The interaction and transformation with nature's natural life force that which transcends all logic, pushes her to create an imaginary universe, a space where the multiplicity of motion acts like a renewed mantra - it grows into a spiritual quest and absolute introspection and sets her on a journey of authenticity and truth. In constant search of textures to nourish her work, Marie-Josée takes pictures and gather materials to return to the studio. All matter is sought as stimuli to glean visual cues and serve as inspiration. Tree bark, paper, metals, stone, wood and fabric are some of her favored elements. She envisions the canvas as a broad surface rather than simply a surface hosting a predominating image. She is interested by the plane relief of a flat surface presented from varying angles. The surface becomes itself a pretext for her spontaneous and intuitive experiments with matter. From her collection of various mediums of paint and molding paste, regularly but not systematically positioned, she ends up creating a denuded pictorial relief from which, the remainder of her work emanates. This stage represents the structural framework of the painting. It is from these beginnings, and the hues & colors from a preselected palette, that Marie-Josée stages a visual and chromatic presentation, the brush dancing at will over the surface. She lets herself go, freely and instinctively stroking the canvas, allowing shapes, lines and forms to shape random recognizable images. She remains in a state of awareness to that which emanates from her sub-conscious and becomes the visual direction that embodies her through the gathering and juxtapositions of matter. While painting a shape is gradually fashioned one brush stroke spawned from the previous one allowing her work to take form.