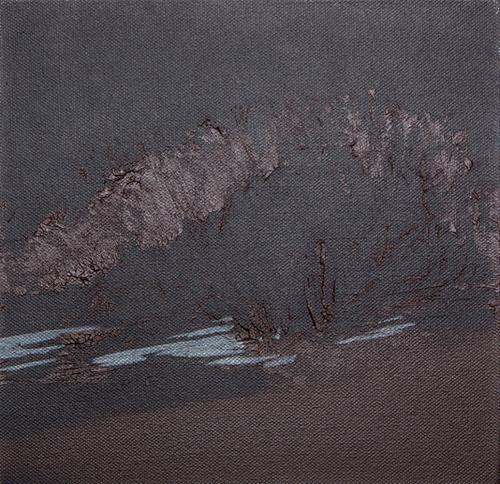 Maria Jose Concha was born in 979, Chile and studied Fine Arts at Universidad Católica de Chile Maria Jose Concha lived for 7 years in the Chilean Patagonia, the world’s southernmost landscape, an experience, which transformed her work and became the focus of her expressive painting. Concha’s work takes those typical phenomena of the landscape and reconstructs, sometimes deconstructing them, into elements, which belong to the painting process. "The landscape is transmuted into painting, and the painting into the essence of the landscape." According to art critic Gaspar Galaz, “The important point of Maria's proposal is the methodological relationship with the material painting. This painting is gestural and certainly informal but, because of the rigor that the artist gives to the painting through the gesture, it elaborates a visuality which, while decomposing the canonical representation of the landscape painting, gets closer towards a speculation, which shows a different manner and a different attitude in her gaze when she faces the natural model or the imagined nature”. Concha’s painting has been distinguished in various competitions, winning the Fondart Region of Aysén competition in 2007, and obtaining “honorable mention” in the first version of the contest “Teraike: Painting the Patagonia” (Chile, 2007), with her work entitled “Final Landscape” (2008, Coyhaique, Patagonia, Chile). Concha has been in several solo exhibitions and has participated in collective art shows in Chile, Argentina and the USA, including “Thresholds 2006”, an exhibition of the most outstanding final projects of the Pontificia Universidad Católica de Chile’s Fine Arts Majors for the previous year, "Arte Ayuda" (2006, 2008 - 2011), "Land Shape" (Santiago, Chile, 2007), "Terra Nova" (Decorazon Gallery, USA, 2007), Collahuasi Art Exhibition Hall, (Iquique, Chile, 2010), "Paene-Umbra / Almost-Shade" (Santiago, Chile 2010), "Material / Landscape" an exhibition at the Art Gallery of Cecilia Palma, Santiago de Chile (2011), artist group show at the Angela Royo Latin American Art Gallery, New York City (2011), and a solo exhibition: "Land of Light and Shade" in the Patagonia (Coyhaique, Chile, 2011). She has also participated in numerous international art fairs including AAF New York City (2008-2015), AAF London Battersea & Hampstead Heath (2011-2015), The Affordable Art Fair Hong Kong (2013-2015), Red Dot Art Fair London (2008), and Bridge Art Fair Miami (2008).