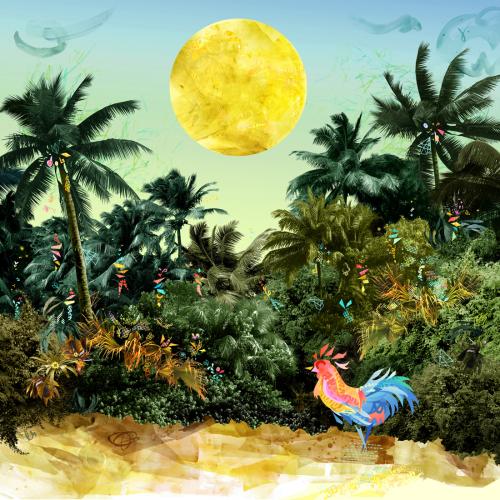 Having grown up in Korea, Hong Kong and Dubai, La Shuks (aka artist and screen printer Katie Mac) absorbed the influences of Asian packaging graphics, advertising and character brands throughout her childhood. She was compelled to continue to move countries frequently well into adulthood. Now based in the UK she uses all those ingredients and by blending dramatic scenic photography with detailed vector-drawn geometric patterns, serves up semi-abstract scenes of alternate future landscapes. The story within La Shuks art pieces: Set deep in the distant future long after humans have ceased to be.The Earth has become over-run with brands and advertising, logos, instructions and packaging. Crammed full of all the words and symbols that had once been so important. This evidence of human existence has remained and over time, merged with nature. It has become engrained in the elements and created an entirely new evolution. New creatures have emerged on earth, and further still, tribes of logo organisms have become conscious and even taken flight! The name La Shuks is derived from "Inukshuks", the stone landmarks used for centuries in the Arctic region of North America, to denote points of reference for navigation in the wilderness... the knowledge that someone has been here before. (As such, there's an Inukshuk hidden in each piece). In addition to limited editions, Katie also produces unique original works. Using silkscreen printing, background layers of atmosphere are applied, followed by a photographic element, taken on her various travels (the Rocky Mountains of Canada appearing frequently). The scene is then added to, with geometric patterns and ‘origami’ creatures. Each segment of its construction has been individually screen printed and contains its own design drawn using vector techniques which produces a precise intricacy of line-work of intricacy and precision.