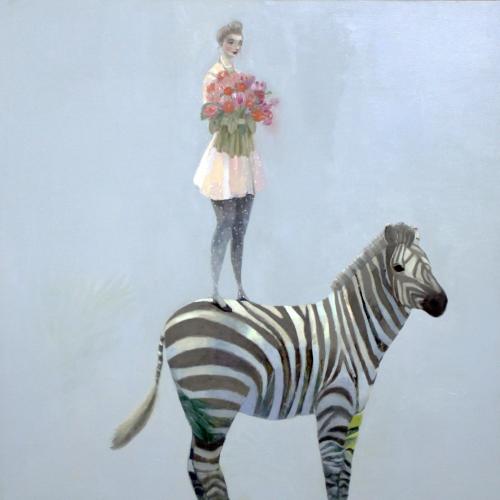 Born in Norway, Kristin Vestgard studied a BA in Fine Art at Falmouth College of Art in 1997. Three years later her studies culminated in a sell-out degree show. Although she continued to live in Cornwall for a another ten years, her paintings are becoming increasingly sought after by galleries in both London and the West Country. One instantly senses the indefinably Nordic quality of her work. Like the silence of snowflakes settling on fir trees, or the ephemeral appearance of the aurora borealis, her paintings whisper to us magic, dreams and times spent in playful contemplation. Her figures, for she is essentially a figurative painter, seem somehow to be part of a narrative that is never explained - it is of course for us to interpret as we will, just as she herself does during the painting process - giving her protagonists full reign to create their own scenarios while she builds up the image with layers of acrylic and then oil, keeping some marks and allowing new spaces to appear. Spaces, in which her figures (always female) can step into. It is an entirely intuitive process that draws upon her inner world of people, emotions, thoughts and atmospheres. She describes it as "a diary with no words where dreams, fantasies and a sort of inner adventure play out." Kirstin's native Norway - a place of ice, snow and fairy tales, has undoubtedly fed into Kristin's paintings. Her colours are cool, her figures fantastical, their clothes creations of whimsy and splendor, in which she wraps her protagonists partly to protect them, partly to hide the secrets and ambiguity of their lives. As a child she had toyed with the idea of being a fashion designer, now the shapes of clothes and the atmosphere that they create, feed into her imaginative world. There are no answers and this sense of mystery and ambiguity is important to Kristin. Just as when, trying to decipher a particularly vivid scene from a dream, one has understood until the meaning has silently changed.