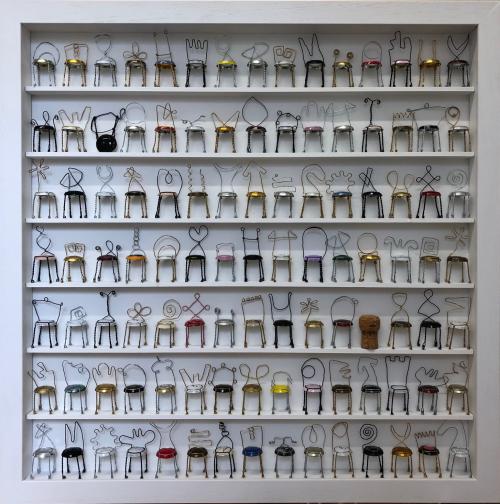 Tiny, miniature goblets made from brightly-coloured sweet wrappers, minature chairs made from champagne tops, or jewellery and clothing stitched together from tin cans and bottle tops – Tinker's interest in re-using thrown away objects chimes well with these recycled times. Her scrapwork clothing and accessories appeared in Dennis Potter's 1996 television series Cold Lazarus, and are on permanent display at the Science Museum alongside work from Vivian Westwood. More recently her artwork has appeared at the Royal Academy's Summer Exhibition 2007, at the New York Museum of Art and Design, and in the White Rabbit Collection, Sydney. Tinker was also recommended in The Miami Herald as one of the top picks for Art Miami/Basel week 2010. Born in Nottingham (1969) but raised in Johannesburg, South Africa, then Leeds, true to her name Tinker trained to work with metal, earning a first class degree in Silversmithing and Jewellery from Birmingham in 1992. As a child in South Africa she collected fireflies, and the urge to collect stayed with her – she soon tired of working with traditional silver and gold, and instead used found objects - the lurid, saturated colours of soft drink cans, shredded into strips and woven into clothes or jewellery, milk bottle tops, plastic tubing, delicate sweet wrappers and foils. Tinker's current art draws from her craft background and puts her extraordinary collection of objects, from crayons and biros to bottle tops and matches, to use in new forms – always colourful and surprising. Tinker lives and works in southwest London.