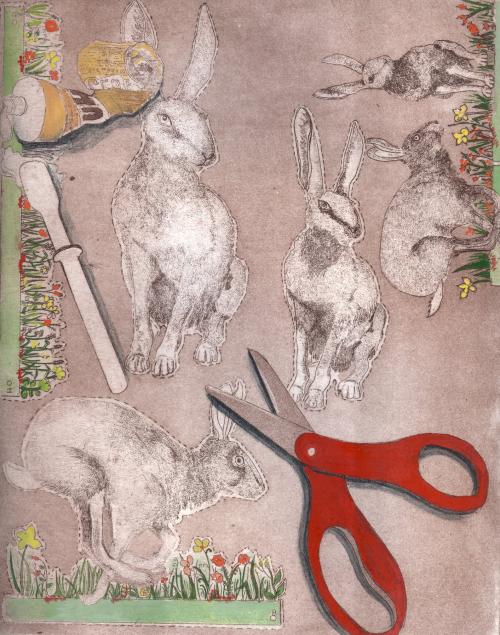 A painter and an illustrator, Jane Daniell discovered printmaking ten years ago, and found that it lent itself perfectly to her very oneiric style. Jane works purely from her imagination, and takes inspiration from artists like Aubrey Beardsley, Arthur Rackham, and more modern illustrators such as Maurice Sendak and Errol le Cain. She has illustrated several of Shakespeare's plays, and her images have been sold at the Globe, the Royal Shakespeare Company, the National Theatre and several international venues. Theatre and drama have always been a strong source of inspiration, and Jane tries to express in her work the magical and the impossible in the way it is often conveyed in contemporary immersive theatre productions, especially through the eyes of a child. The process of making the plate takes second place to the drawing of the image, which can take Jane several weeks. No detail should be omitted. "It is as if I were in the picture, and in walking through the scene, I am observing all of its intimacy and minutiae, and like a child, find all are of equal importance to me." The children she portrays evolve in their own world, which is separate to the world we perceive as adults. They see it through wise eyes and seem to have full understanding of its magic and fantasy, all of which we have forgotten as we grew older and learned to "put away childish things". Jane is co-chair of the Printmakers Council. Her work has won numerous awards and is regularly exhibited.