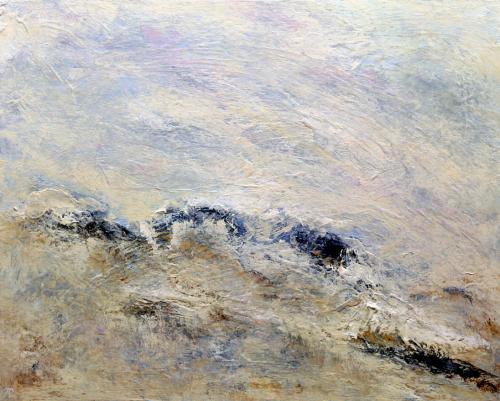 James Tatum was born in Canada in 1944 and moved to the UK in 1987. He now lives and works in Exeter, Devon. He has drawn and painted for most of his life but only became a full-time painter in 2007 which prompted his move to Devon following a long career in industrial design and engineering in London. James is largely self-taught, although he has had lessons from David Tress, with whom he now paints on an occasional basis. He is an accomplished landscape artist, whose work is full of energy, light, and atmosphere. James explores the landscape in a variety of mediums. Paintings start en plein air in watercolour or acrylic, based on his observations and experiences. Back in the studio these may be painted over in a very abstract fashion, before more representative elements are restored, usually in oils or acrylics. The artist states of his work; 'My goal in painting is to show the world in a personal way. It often involves simplifying the scene to try to capture its essence as I see it. I am particularly interested in the effects of light, shadow and movement. The paintings often incorporate the use of rough textures as the picture may warrant. I am interested in trying to capture my direct and often passionate responses to a scene which convey something of what it felt like to be there more than mere depictions.' James regularly exhibits throughout the U.K., the U.S.A. , Holland and Switzerland. His paintings are held in private collections in the U.K., Holland, France, Italy, Switzerland, Australia, New Zealand, Canada and the U.S.A.