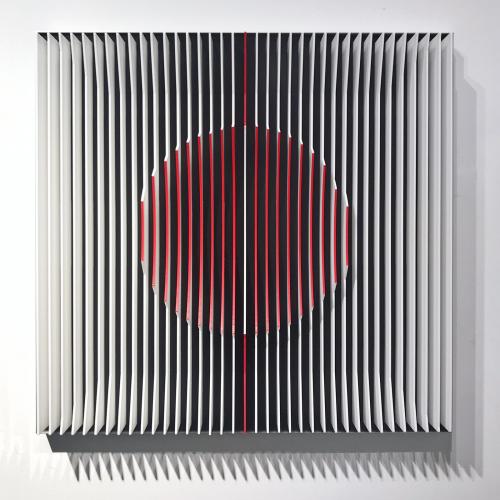 J.Margulis (Caracas, 1970) began his career as an artist through photography while studying Management in his native Venezuela. He worked in a family-run business exploring digital printing and later in life decided to apply his professional skills to art making, as he progressively became interested in sculpture. Today, his artwork is the result of an intrinsic connection between two and three - dimensional planes, working with sculpture in parallel with photography. Margulis began producing acrylic 3D sculptures and compositions made from different types of colorful plastic sheets, affixing them onto surfaces, other times as free standing structures or traditional fixtures on a wall. As a direct consequence of these productions, he began photographing his pieces as a way of documenting them, thereby generating a significant volume of autonomous photographic work which created an intimate connection between the photograph and its related piece, developing a visual yet independent dialogue through language, photography and sculpture. As most Venezuelan artists from his generation, Margulis came of age with the rise of Geometric abstractionism and Kinetic art, influenced early on by his encounters with the works of Venezuelan kinetic artist Jesús Soto and Naum Gabo, the Russian constructivist sculptor, specifically through his exposure to Gabo’s Linear Constructions in Space series, which challenge the construction of volume and space, creating figures with fine threads on a structure. For Margulis, abstraction is the language in which he expects magic to happen, an argot that he masters with ease, where space and its possible construction with the minimum use of materials become one of the playful strategies of his artistic expression. His colorfully sculpted elements emerge as models for his photographic creations, and conversely, each medium coexisting individually, yet dialoguing with the other, creating a variety of discourses based on different perceptions, in an infinite loop in which one agent of expression nurtures and enriches the other. Margulis’ effort has evolved to become a combination of sculpture and photography, creating visual