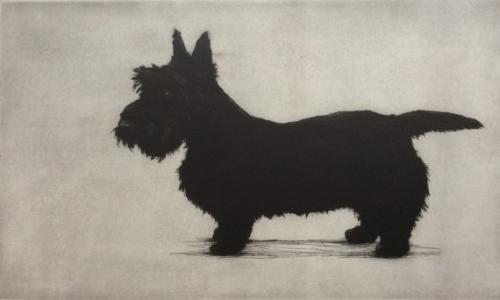 Animals have always been at the heart of my work. I find the form, movement and behaviour of the creatures I draw a source of limitless fascination. I love the idea of them watching me, watching them as I draw. I hope my appreciation of the sentience and character of the animals I draw comes across in my work. Over my career I have drawn everything from primates to penguins, dogs, ostriches and even an echidna. These days dogs are my main focus, mostly because I adore dogs but also because they are such an integral part of life. I am delighted by the theory that humans and dogs co evolved, we wouldn’t be what we are without them and vice versa. I try to pare my images down to a balanced simplicity that directs attention to the subject of the picture. I try to balance the subject and the space it occupies, giving each equal importance. Light is hugely important to my work, I imagine my subject in three dimensions as I draw and the light describes the musculature and texture that gives the drawing it’s presence and grounds it in the picture. I aim to capture a pause, a moment where whatever I draw looks like it could wander off or leap up any minute. My influences include Japanese prints, Chinese and Japanese brush drawing and the European artists who were influenced by Japan. I am really excited by composition, by artists like Bonnard and Leon Spilliaert. I have long been a fan of Munch for his direct markmaking, colour and intensity and at the other end of the spectrum, Hammershoi for his limited palette, sense of space and calm. I am interested in black and white photography and film and have recently discovered and been amazed by the films of Yasujiro Ozu. The photographs of Andrei Tarkovsky are favourites too. Lastly, I would like to namecheck a great influence in natural history illustration, local to me in Northumberland. Thomas Bewick was a formative influence, both in drawing animals and printmaking. His intensity and humour are as vivid today as they were in 1794 when the first volume of British Birds was published.