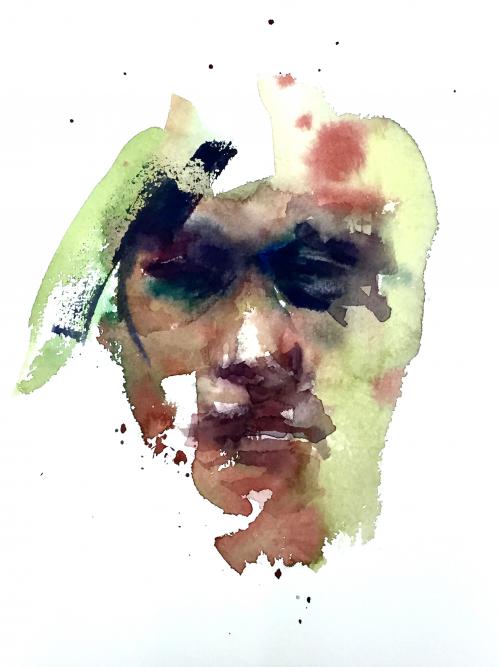 Harvey CHAN (b 1957) was graduated with honor at the Ontario College of Art and Design in 1982, majoring in illustration. Chan won numerous awards in his career years as an illustrator in Canada; and he was an art teacher at OCAD University, Sheridan College, and Toronto School of Art at his later years in Canada. Chan returned to Hong Kong in 2011, founded Art for Life, where he continues to develop his career as an illustrator, an art teacher, and an artist. Chan's passion has always been in figurative drawings and paintings. Chan’s illustration technique and fine art concepts are rooted in traditional art, and it is from there together with his affection in contemporary art, leads to the development of his current series of drawing/painting, the 'Speaking Faces' series. The series is based on imaginary human faces, and it has become a way for Chan to re-discover and to re-connect himself with people in his world—now and then. With their gazing eyes... viewers are invited to a conversation, meeting one another without being aggressive or judgmental, seeing through our souls, expressing a sense of compassion, peace, and looking for a solution among any conflict or tension. Selected Awards: 2001 Short-listed as the Top 3 at Governor General’s Award for Children’s Book Art, ‘Wild Bog Tea’. 1999 Ruth Schwartz Foundation Award for Canadian Children’s Books Gold and Silver Awards from CAPIC 1998 Governor General’s Award, short-listed for Children’s Book Art, ‘Music for ‘The Tear of the Sea’ Gold, Silver and two Awards of Merit from CAPIC 1997 Amelia Frances Howard Gibbon Medal from the Canadian Association of Children’s Libraries at The National Library in Ottawa Ruth Schwartz Foundation Award for Canadian Children’s Books 1999 Gold and Silver Awards from CAPIC (Canadian Association of Photographers and Illustrators in Communications) 1996 New York, Society of Illustrators Applied Arts Annual, Gold Award Studio Magazine, Gold Award 1993 Most Promising Artist Award, Painting section 1992 Ruth Schwartz Foundation Award for Children’s Book Paintings for “Roses Sing on New Snow” 1990 Studio Magazine, Silver CAPIC Annual National Show, Gold and Silver Awards