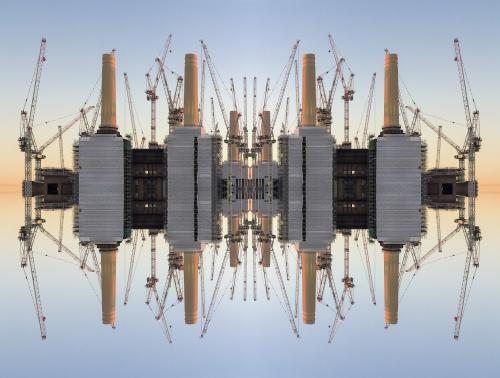 Daniel Sambraus was born in Munich in 1967 and he now live and works between Tepoztlan in Mexica and London. He is a digital photographer who has been photographing architecture and urban landscape for many years. In 2995 he graduated with a BA (Hons) in Photography, London College of Communication (former London College of Printing) and followed thos with a Postgraduate Certificate in Applied Art and Visual Culture, London Metropolitan University (former London Guildhall University) in 1996. Daniel deals with the architecture of the urban landscape. By consistently applying the basic design principles of fragmentation, repetition and montage, varying degrees of alienation of the selected motifs are created, sometimes reminiscent of ornamental structures. Single elements of the urban cacophony can thus be isolated and highlighted. He believes that each urban space has relatively few “signifiers” that are individual objects, but, in the eyes of a viewer, define the space as a whole. The creative process behind Daniel’s work involves walking through and observing the architecture of cities. He takes a camera with him on these walks in order to capture images of what he is inspired by. He states that sometimes this picture is the basis for the final image. But often, some element is not right, the light, the time of day, the angle. Daniel then returns, sometimes several times, often with tripod for long exposures. Notable exhibitions include "London Lockdown"; Solo Exhibition; Turner Barnes Gallery, Shenfield, UK in 2020 and “About Future”; group exhibition; LoosenArt, Millepiani Gallery, Rome, Italy in 2019