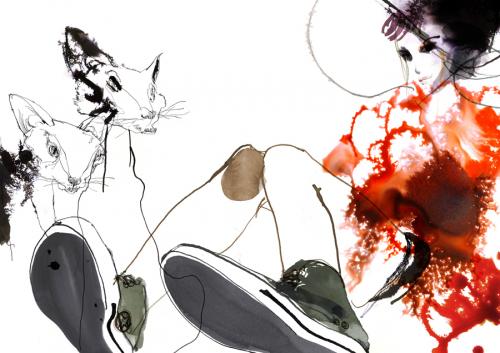 Daniel was born Sweden in Sweden in 1972. Daniel Egnéus has spent over 20 years in cities as Prague, London, Berlin, Bologna, Rome, Milano, and has now made Athens his base. Creating lucid, dreamy and vibrant illustrations that reflect his inner world, Egneus' work is an expression of his colorful and rich life, which finds its way into his work, inspiring us with its beauty and depth. Daniel Egnéus has had successful collaborations with clients such as Drambuie Whiskey, which gave an award in 2004, and the Pori Jazz Festival, for which he was elected "Best Illustrator" in 2005, by the Association of Illustrators in the UK. He has published numerous books, including The Hot Dog Cookbook, in France for which he won the Prix Gourmand (2008) for "Best Illustrated Cookbook in France." In 2004, the Italian publisher Coniglio Editore published Daniel's first collection of autobiographical illustrations. And in 2005, Sky Channel dedicated a 15-minute documentary on his work entitled "From Sweden With Love."