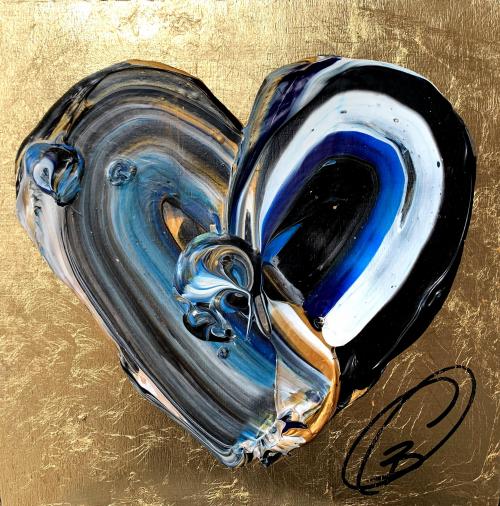 Cynthia Coulombe Begin brings a sensitivity to her work that stems from her exploration of identity in performance art. Born in Miami, Cynthia grew up in Quebec City where she earned a Bachelor of Visual Arts in 2006 from Laval University. Her work draws us into her internal world: exploring the soul and matter, conscience, and the universe.  Her paintings portray mostly large close-up portrayals of the mouth and eyes, which are depicted with great contrasts of colour and chiaroscuro. She focuses on an abstract universe full of movement, symbolism, and eroticism.  Cynthia is particularly interested in the fragmented corporal shell, which she emphasizes through spontaneous movement and vivid colours. She comments: “My experience with painting has led me to see things differently, to self-discovery and to great astonishment. A movement begins to take shape, from the outside in, resembling a quest for invisible energy and the total union between body and mind. The notion of performance, the search for identity, and the exposure of the body to an explosive universe are indicative of my desire to cast light on all the beauty and vulnerability of our existence in a single image.”  Cynthia Coulombe-Begin began her professional artistic career at the Marius Barbeau Museum with her first solo exhibition, Traces Corporelles, in 2006. She has continued to exhibit in galleries and art fairs in Hong Kong, New York, Los Angeles, Miami, and Quebec. Coulombe-Bégin’s works have been acquired by numerous private collectors in Canada, the United States, Europe, Brazil and Australia