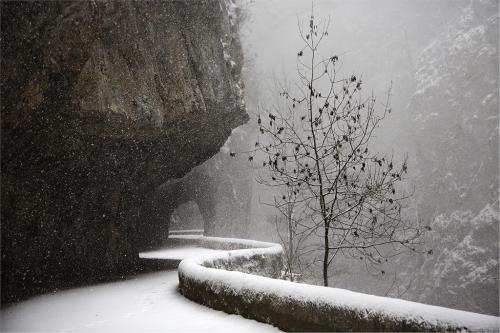 Christophe Jacrot is a contemporary photographer living in Paris, who was born in 1960. The artist has been dabbling in photography since his adolescence but was first noticed in the cinema. He directed several short films, most of which received awards. Feeling the financial constraints that the cinematographic industry can sometimes impose, Christophe Jacrot turned his attention to photography, an art-form to which he applied his talents utterly. At one stage commissioned to produce sunny images of Paris for a tourist brochure, the photographer ends up putting together an artistic project involving cities in inclement weather. "The weather was desperately bad, which gave me the idea to photograph several somewhat more untraditional images of Paris to capture these amazing ambiances that few photograph. I had in mind Henri Cartier-Bresson's fabulous photo of Giacometti in the rain, and the photo of a guy jumping over a puddle in front of the Trocadero, by Elliott Erwitt." Out of this project comes, in 2007, a first exhibition at the Lucernaire which very rapidly leads Christophe Jacrot to the publication of a book of his photography, Paris in the rain (Edition, Chêne). Since then he has been successfully continuing this study in different cities. He has photographed Hong Kong, Tokyo or Taipei in the mist and the rain (Hong Kong and Asia in the Rain series) as well as New York in a snowstorm (New York in White series). In October of 2012, again in New York, Christophe photographed entire districts devoid of electricity and plunged into darkness after Hurricane Sandy (New York in Black series). More recently the photographer headed for Iceland and its natural landscapes and the coast of Normandy in France which he has captured under a thick blanket of snow and in the midst of a storm (Snjór and Blizzard series).