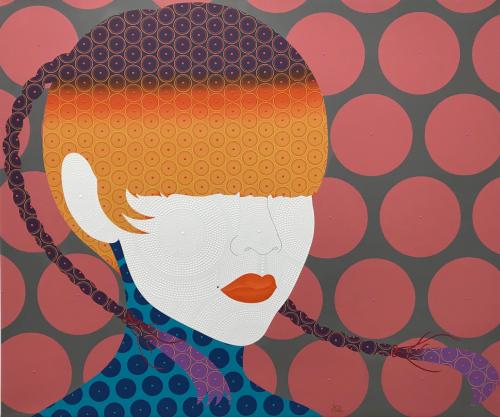 Chamnan Chongpaiboon was born in 1982 in the Thai city of Kanchanaburi, into a large family that from the beginning supported his passion for art. The artist decided to establish his artistic studio in the city of Bangkok. Regarding his training, he attended the University of Fine Arts in Shupanburi where he obtained a diploma in Fine Arts. In addition, shortly after, he earned a Bachelor of Fine Arts with a major in Engraving from the King Mougkut Institute of Technology in Ladkrabang.  Chamnan creates bold female portraits using backgrounds based on graphic textures and intense primary colors influenced by neo-pop, in some of them we can observe the lack of color and others, however, are authentic explosions of color. He uses a new technique of a very personal and artisan nature. Chamnan Chongpaiboon is part of the new generation of young Thai artists, who work with an innovative graphic style, under the modern foundations of multimedia art and Japanese printing forms. His inspiration is closely linked to artists such as the Japanese Yayoi Kusama (1929, Matsumoto, Japan) whose work revolves around psychedelia, repetition and patterns. The Buddhist religion is closely linked to the work of Chongpaiboon, the use of Buddhist mandalas referring to the idea of the circle with a very deep meaning. The artist believes in the "wheel of Dhamma" that represents integrity, peace and eternity, and that is why the circle is crucial when looking at his pieces.  Chamnan’s artistic production is limited due to the meticulous work carried out in the realization of each piece. He is an artist with a great international career. Among the large countries and cities in which he has exhibited his pieces we find: Australia, London, New York, Malaysia, Hong Kong, Madrid, Jakarta, Miami, Singapore, etc.