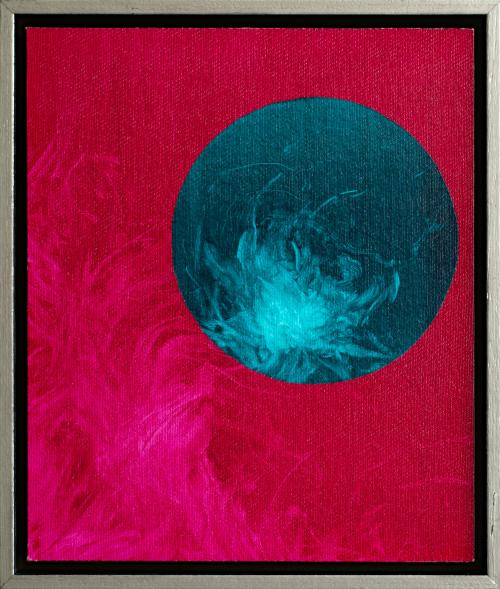 The penetration of surfaces is the common thread that runs through all creative areas in the oeuvre of Boje Arndt Kiesiel (1973). Again and again the painter and object artist breaks it open in his works in order to make hidden things visible. After reflecting on issues critical of consumption and society in his assemblages in recent years in the reflections of the shiny and smooth surfaces, the more recent paintings bring subjective truths to light. The theme correlates with the way he works: Kiesiel gradually removes paint in the form of défrottages and creates inverted paintings. The picture surface is opened and the viewer is given a view of what is “behind”. This turns out to be extremely deep. Because it is not only the surface of the picture that is broken up by the bright structures that alternate between abstraction and imaginary figuration, which are recovered from the paint like an archaeological excavation and thus also bring up what is hidden. Rather, in analogy to this, they also trigger a release of what is hidden in the viewer. Because what you see in these défrottages depends largely on the subjective imagination of the recipient. The canvas thus becomes a projection surface for inner images and challenges, as it were, a viewer who moves out of his comfort zone by not consuming art alone, but actively participating. With his paintings, Kiesiel thus ties in with the essential aspects of his previous work, which, far from contemplation, demands a responsible observer. Coming from graffiti, Boje Arndt Kiesiel occasionally lets elements of LowBrow, Urban and Pop Art shine through in his art to this day. Over the years he has reinvented himself again and again in painting, assemblages, sculptures, drawings, photography and installations. Kiesiel lives and works in Hamburg.