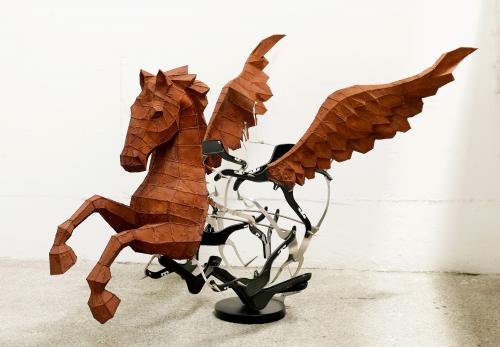 Ban Zhang Zhe (Cheong Chi Ping) is an artist who believes in the value of innovation. He is passionate in creating works of sculpture using non-traditional materials, breaking the boundaries of tradition and leading to almost complete freedom both in the deployment of materials and the creative process. He used to explore philosophy through his works, he likes to explore themes of economic and social change in the city around him—making his thoughts and his sculptures to interact and beyond.. With this notion in mind, The “Recollection of Time series - Hanger is Counteroffensive” was born. By upcycling discarded hanger and depriving of their original function, this became a unique material of his choice. Zhang not only conveys a conservation message, but also render treated hangers as a metaphor to depict the social and economic change of Hong Kong. Hong Kong was used to be an important industrial city with garment manufacturing—once a major sphere, and now a financial, investment-led metropolitan city. In 2000, Zhang Zhe moved to Taiwan , a place where he has no prior connection nor familiarity, to re-discover and to re-compose his identity and positioning as an artist/sculptor. The 8-year journey in Taiwan was fruitful to Zhang, with no boundaries, his creativity and innovation was fully actualized in a number of remarkable and acclaimed projects, while he got inspired by the cultural differences through intensive exchange with the Taiwanese artists and the audience at large. In 2008, Zhang Zhe returned to Hong Kong and stationed in Jockey Club Creative Art Centre (JCCAC). Zhang continues his journey as a sculptor! Zhang Zhe is an active sculptor in Asia since early 1980s. His works were featured in numerous international exhibitions, including ECHO-Hong Kong Sculpture Biennial 2010, Spain LOOP Video Festival 2009-10 This is Hong Kong, Oasis Mirage Hong Kong International Sculpture Symposium 2009, Kaohsiung International Container Arts Festival 2003, The First Annual Exhibition of Chinese Contemporary Sculpture (group) 1998, etc.