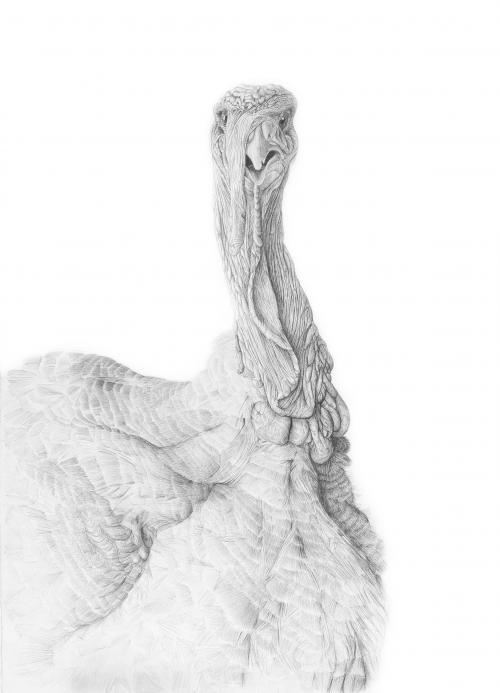 My journey into the world of the E A T A B L E S began in the summer 2019. Since then I have been studying the nameless animals in detail in stables and on pastures and have been fascinated by their peculiar beauty. Opposite the observer the question arises to what extent we should recognize the individuality and the dignity of each of these ´beings in feathers and fur´.

In her pictures, Babette Brühl concentrates entirely on the peculiar and essential elements of people, animals and plants. In doing so, she directs the focus entirely on the character by modeling the protagonists of her pictures from a non-representational space. Elements that provide spatial orientation can only rarely be seen on the picture surface. In contrast to this, the traces of life can be recognized in detail, insofar as they are character-forming: wrinkles and scars on the skin or on materials, the surfaces of which suggest inner psychological states and forms express posture. Babette Brühl works on classic materials such as paper and canvas, paints and pigments, pens and brushes. In her artistic design, she refers to old master techniques and uses them to show the observer the ambivalence of contemporary phenomena. She painterly models bodies and organic forms in light and shadow. She accompanies her creative processes with photography, her photographs document forms of appearance and are at the same time a sketchbook. Opposite, Babette Brühl creates an imaginary space between the viewer and the portrait in which it is possible to reflect on one's own existence as a peculiar appearance.