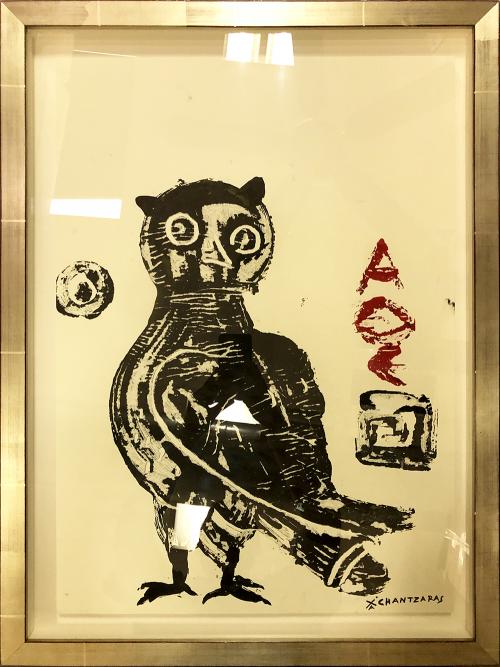 (b. Agrinio, Greece, 1977) Apostolos Chantzaras, continues to develop his own visual and entertaining world, without fear for bold line, form and saturated colour. Greek-born Chantzaras first studied Painting under Chronis Botsoglou at the Athens School of Fine Arts, and then continued studies in Photography and Fresco. He was nominated for the IKY scholarship in 2000-2003, and studied Painting at the Université Paris VIII (2004-2005). Influences of working beside his father, Eleftherios Chantzaras, a renown Byzantine painter and iconographer, is also quite relevant in his style and technique. His extraordinary means of expression reveal influences from the shadow puppet show, combining a rich legacy of symbols related to Greece and that part of the world - The sun, the cross, the fish, the church, the simple islanders, all come together in a unique, perceptible artistic amalgam. Chantzaras’ lyrical work has been featured on the cover of several published novels including: “Olga or Nothing” by Lito Pitiris, Kedros Publishing (2013), “Imaginary Adventure” by Alexandros Kotzias, Kedros Publishing (2012), and “Glass Industry” by Menis Koumantareas, published by Vima Newspaper (2011). In 2008, Chantzaras produced the collector stamp series “Greek Traditional Products” for the national Greek Post (ELTA). In 2013, Chantzaras was featured in Florence, Italy in conjunction with the Venice Biennale. Apostolos Chantzaras lives and works in Athens. He is represented by Skoufa Gallery (Athens, Greece), and the DECORAZONgallery (USA/ London).